William Minter Flewett was born in Shoreditch, London, England, in 1832, the youngest of three children of Thomas Flewett (a farrier) and Rebecca MINTER. William came to St. John, New Brunswick in Canada in 1853, to work as an engineer. He married Sarah Lipsett BROWNE (originally from Ballyshannon, Ireland) at the end of that year. He was 21, she, 22. They had six children between 1854 and 1864–one son apparently dying young.

By the time of the 1871 census, Sarah Lipsett (Browne) Flewitt was in hospital in St. John, and “of unsound mind”. William, age 39, had remarried (Rebecca, surname unknown, age 36), and lived in Cape Breton, Nova Scotia, with Elizabeth, Jane, Sarah, and “Ellen” (Mary Helen). His occupation was given as “engineer” on the census–he was probably working in the mines there. Wilhelmina’s whereabouts at this time are a mystery–she wasn’t on either the Cape Breton or the St. John 1871 census–we have not discovered her again until the 1910 Chicago census, where she is married (apparently for the second time) to Albert Young, and lists her occupation as Christian Science practitioner. She brought two sons to that marriage–Samuel W and James W, and had a daughter (Mabel) in about 1912.

After sending his other daughters off to boarding school in Boston, William made his way west, arriving in Nanaimo, British Columbia, some time around 1873 (apparently without Rebecca). The daughters joined him there. The three oldest promptly married Nanaimo men during the next two years (at the ages of 19, 17, and 14), leaving only Mary Helen at home with her father and his new third wife, Martha (born in Holland, the same age as William, immigrated to Canada in 1875). William is said to have worked as an engineer at Bulkley’s Harewood Mine from 1875 to 1876. His diary (present location unknown) is reported (by a descendant who has seen it) to describe his work in marine salvage over the next few years — “I have cleaned my pistol and packed my sextant, and am away.” Three months later, “Home again.”

In 1879, he bought a steam launch–the Mercury–renamed it Nellie, and advertised two trips a day from Nanaimo to Departure Bay, carrying 15 passengers at a top speed of 8 knots. A few months later, the Free Press reported that the Nellie had sunk in Nanaimo Harbour. She was refloated, thanks to her compartmented construction. An unconfirmed account also has William working as the engineer of the steamer Etta White [one of the two steamers towing the Thrasher when she went aground off southeast Gabriola on what is still known as Thrasher Rock].

By the time of the 1881 census, the three Flewetts were living on a 320 acre farm, known to the family as “The Ranch”. They were the only European inhabitants of DeCourcey Island, southwest of Gabriola. Their house was located “across from the southern entrance to False Narrows”. Flewett Harbour, as it was known then, is the present Boat Harbour. One of the older daughters, Sarah Maria Raper, lived nearby on Gabriola Island, with her husband Alfred and two daughters–Emily, 3, and Mabel, 2. (Until they were drawn to Texada Island in the 1890s, by the lure of mineral wealth.) At Christmas of 1881, the Farmer’s Market in Nanaimo (prop. David Hoggan) was selling “mutton raised by Mr. W. Flewett, De Courcey Island”. William and Martha were 50, Mary Helen, 17.

Early in 1883, there was a small flurry of articles to do with the Flewett family in the Nanaimo Free Press. On January 10 , William disclaimed responsibility for Mary Helen, who had left home without his consent, and also offered the DeCourcey farm and the Nellie for sale. On February 17 , Mary Helen married Thomas R Jones without her father’s consent–which led to a diatribe by the Rector of St Paul’s against the marriage of minors, also in the Free Press. Nothing more is heard of the sale of the farm, nor of “the children of disobedience”. Readers will have to use their imaginations to flesh out the rest of the story–it does not seem to have been passed down in family legend. Was William’s offer to sell the farm and the Nellie related to Mary Helen’s leaving home “without consent”? We do know, from one of the Jones’ descendants, now living in Seattle, that the Jones family moved several times between Nanaimo and Black Diamond, Washington, before settling in Seattle in 1899. Their house in Seattle, built by Thomas in 1903, still stands. Mary Helen had nine children, only four of whom (two girls and two boys) lived. She remarried shortly after the death of Thomas Jones, in 1909, and died in 1921. One of her children was named Martha, another, Minter, which suggests that some reconciliation had occurred.

In 1884, William donated $5.00 (a large sum for the time) “in aid of the widows and children of those killed in the late explosion at the Wellington Colliery”. In June of 1887, he made a similar donation, following Nanaimo’s largest mine disaster.

Transportation to and from Decourcey Island was not without problems. In 1884, a boat lowered from the steamer Amelia at “Flewett’s Island”, was caught in the paddle-wheel and smashed to pieces. Fortunately, the crewman in the boat escaped. In 1886, William had to row to Nanaimo when the mail boat failed to dock at Gabriola and Decourcey. [We wonder what happened to the Nellie.]

The previous year, while building a new dock, William had discovered a strange clam embedded in the rock of the shore. He sent it to the Free Press for identification.

Mr. W.M. Flewett, of the DeCourcey Islands, has furnished the FREE PRESS with a wonderful and rare curiosity in the shape of a clam embedded in a piece of sandstone. The piece has been broken off the sandstone rocks at the water’s edge where Mr. Flewett has just completed a substantial wharf.

The question for experts to decide is how the clam got into the solid rock and lived in its narrow cell. This is not one of the many petrifactions found on this coast, but is evidently their natural home and mode of life, for they can be found in the rocks of DeCourcey Island, which is situated about 10 miles south of Nanaimo, in large numbers.

The walls of the cells and passage are worn as smooth as the finest glass.

Any person desirous of inspecting this natural curiosity can do so by calling at this office.

A number of our local scientists have examined the rock and clam alluded to in our issue of Wednesday. Each of the savants holds a different opinion as to how the clam got into the rock and, after getting in, how he scooped out such a secure home and, after making things comfortable in his rocky fastness, how he managed to subsist.

The clam, about two inches in length by an inch in diameter, was found embedded in the rock and, when taken out, was alive and made delicious clam chowder.

The fact that clams could exist alive in the hard rock for a number of years appears to be a novel one, and we would be pleased to hear from any person who has made this particular branch – which we might appropriately name “clamnology” – a study, and who can enlighten the public on the mysteries of living clams in the hard sandstone.

William Flewett’s Clam
William’s curiosity about nature was common in late Victorian times, particularly in the professional class. It would not have been unusual for an “engineer” to send a strange clam to the newspaper for identification.

He had found a piddock — a clam of the family Pholadidae — which, when still quite small, uses its shell to burrow into wood, shale or sandstone, where it lives and grows, enlarging its living space, but leaving its entrance hole small, as a defense against predators. Water sucked in through the entrance is filtered for small organisms on which the clam feeds.

Unfortunately, the newspaper article doesn’t give quite enough information to identify the species. If full-grown, its size suggests either Penitella penita, the flat-tipped or common piddock, or Penitella gabbi, Gabb’s piddock. It could also have been an oval piddock (Chaceia ovoidea) or a young rough piddock (Zirfaea pilsbryi. Piddocks contribute to the erosion of our coast — as do people breaking off rock to look for piddocks.

In the summer of 1887, there was a land rush on the DeCourcey group of islands, sparked by the prospect of a coal seam running to them from Nanaimo. William and Martha bought up the remainder of DeCourcey Island, and Ruxton Island [then called Flewett’s Island]. [Only small coal deposits were ever discovered, though efforts to find a workable vein continued for several years.]

By 1888, William’s occupation was given as “farmer” on the voters’ list. Subsequent articles in the Free Press suggest that the Flewetts had settled down to raising poultry and vegetables. In October, 1888 , William took an apple weighing twenty ounces [570 grams] to the Nanaimo Free Press office. The apple was from his first attempt at grafting, in 1885. Although unable to recall the name of the parent tree, he believed that it was Australian. In June of the following year, he took in some monster cherries “…of the Yellow Spanish variety” in addition to his usual assortment of produce. He complained of the continued dry spell, and described a method of outsmarting crows which he had developed. In August he delivered “several large and luscious peaches”, and in September, a 22 ounce [625 gram] apple — larger than the previous year’s.

On October 22, 1889, William arrived in Nanaimo, having piloted the steamer Isabel through the False Narrows. He reported that “some miscreant, or miscreants” had shot several of his sheep, “including an old pet ewe which he has had for the past 10 years”. He offered a reward of $50 for the conviction of the offenders — we don’t know if they were ever identified.

In 1892, William is listed as a passenger on the steamer Esperanza. No further mention of the Flewetts is found in the Free Press in the next three years.

A daughter of Sarah Maria Flewett–Emily Raper–taught at the South Gabriola school for two years (from 1896 to 1898) before marrying Jack Lawson and leaving the island. (It was hard to keep a teacher on Gabriola in those days–Emily lasted a year longer than most.)

William and Martha both appear on the 1901 census, giving their religion as “Agnostic”. In the 1909 assessment, the “Ranch” on Decourcey, 600 acres in size, was valued at $100,000. According to one source, “Mr. Flewett appeared frequently in Nanaimo when he was in to sell his produce, paid a visit to many of his friends. On April 27th, 1912, Great-grandfather Flewett paid a visit to his Great-granddaughter on his 81st [sic] birthday.” A photograph of him, taken about that time, can be found on page 35 of The People of Gabriola by June Lewis-Harrison (Friesen & Sons, 1982 — now out of print).

William died in July of 1914, at the age of 82. Martha followed him seven months later, aged 83. Both were buried in the Nanaimo Cemetery. 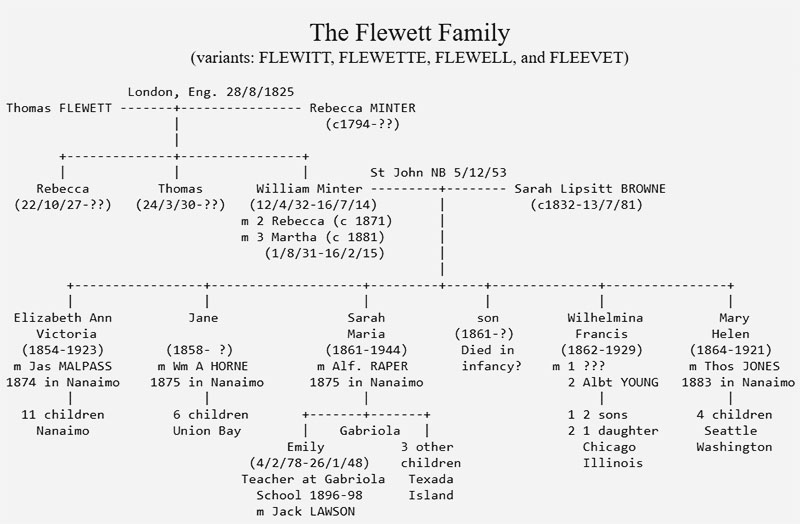 The History Committee thanks:

without whose help, and contribution of family stories, we could not have reconstructed even this much of the Flewett history.