The Esperanza, Atrevida, Eena, Kulleet, Quinitsa and the Quinsam have all been a big part of Gabriola life.

Weekly runs to Gabriola in the early 1890s

Owned by Messrs. Forman & Campbell, the steamer Esperanza (Spanish for “Hope”) made regular weekly trips to Gabriola and DeCourcey Islands. She is first mentioned in the Nanaimo Free Press in 1892, as making a double round trip to the Islands every Friday, leaving Nanaimo early in the morning, returning to that city before noon, then leaving again for Gabriola late in the afternoon.

Funerals on Gabriola were often scheduled for Fridays, in order that the minister and mourners could come from Nanaimo for the ceremony.

On January 6, 1893, the Nanaimo Free Press announced that
“…Foreman & Campbell have taken their steamer the Esperanza off the Nanaimo, Gabriola Island route. This will be a great loss to the Island farmers, who have now no means of communicating with the city, except by sail or row-boats. The steamer has been taken off because it did not pay to run her, in fact the proprietors have been making this trip at a loss for some time past.“

The steamer continued to visit Gabriola when chartered (for funerals or inspection of the lighthouse) as late as 1894.

In this photograph, the Esperanza appears to be in False Narrows, probably near the dock located there in the 1890’s.
photo: BC Archives and Records Service

Atrevida was named for one of the vessels in Spanish explorer Alessandro Malaspina’s 1791 voyage to Vancouver Island.

In 1927, there were 250 full time residents and 30 privately owned automobiles on Gabriola.  Gabriolas petitioned BC Premier John Oliver for “a ferry service for transportation between Gabriola Island and Vancouver Island …  to operate from the Government Wharf on Gabriola Island across Northumberland Channel.”

In 1931 the provincial government contracted with Thomas and William “Bill” Higgs of Sidney to operate a charter ferry service as the Gabriola Island Ferry Company.  The Higgs brothers put their new 78-foot wooden ferry Atrevida on the run.  She boasted an upper deck with restrooms and observation lounge, and made four daily round trips from Nanaimo to Gabriola.

When the Atrevida broke her main crankshaft in 1955, she was replaced with a bigger 92-foot steel ferry, the Eena.

The Atrevida later operated between Texada Island and Powel River until 1969 when she was sold to private interests.  In 2015 she was still afloat as a private yacht in the southern Gulf Islands. 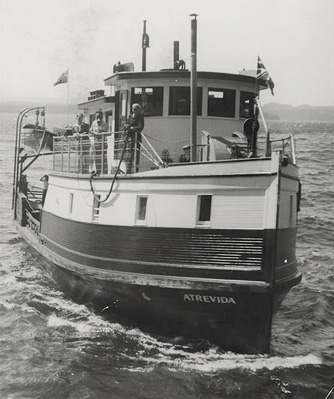 Part of the Highway System

Gabriola ferry Captain Bert Davis bought the Eena from the BC Department of Public Works in 1955 to replace the disabled old ferry, Atrevida.  The 12 car Eena was an early “ro-ro” (roll on, roll off) type ferry designed to carry vehicles across the Fraser River from Richmond to Ladner before the completion of the George Massey Tunnel at Deas Island.

In 1962, the BC Government’s Toll Highways and Bridges Authority purchased the Gabriola Ferry Company, and the Eena.  Gabriola and the Gulf Islands were now connected by ferries to the rest of the province as part of an expanding system of provincial highways.

In April 1962, the Eena came to the rescue of the much larger BC Ferry Chinook that had run aground on Snake Island outside of Nanaimo’s Departure Bay.  The Eena managed  to rescue 68 passengers from the stranded Chinock which floated off on the next high tide.

In 1964 the Department of Highways replaced the Eena with the bigger and faster Westwood that could carry 19 cars and 150 passengers. 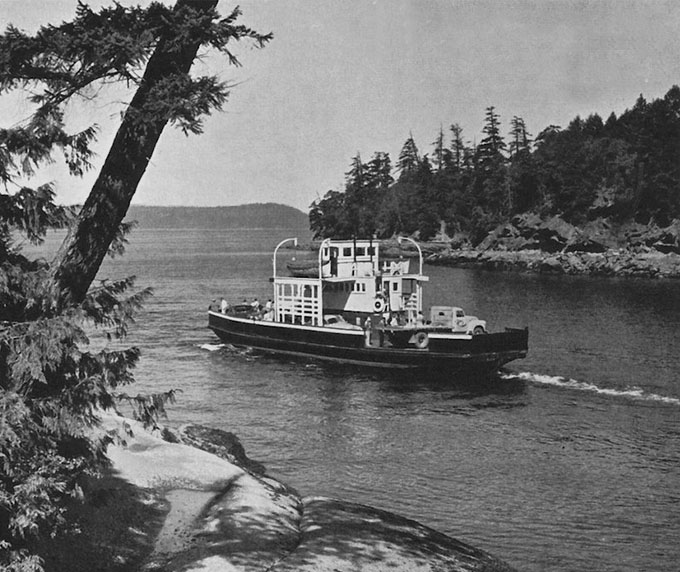 Eena is the Chinook word for beaver.
photo: Richard Harrington

As Gabriola’s population grew, larger vessels were pressed into service.  In 1972, with more than 700 full-time residents on the island, the newly launched 155 foot Kulleet made her first run from Nanaimo to Gabriola.  Local MP Tommy Douglas and Nanaimo mayor Frank Ney were aboard to officiate the inaugural run.  The Kulleet could carry 26 vehicles and 150 passengers.

By 1981, the Ministry of Highways determined that the expanding population had again overgrown ferry capacity, and the Kulleet was replaced by a larger vessel, the 50 car Quinitsa.

Kulleet was subsequently moved to the Fraser River where for the next 27 years she operated the Albion-Fort Langley run until she was sold off in 2009.

In 1969 Tommy Douglas was elected Member of Parliment for Nanaimo-Cowichan-The Islands.  As former Premier of Saskatchewan, Douglas was known for implementing Canada’s first public medicare plan in 1961. Douglas represented Gabriola in the House of Commons until 1970.  In 2004 he was voted the “Greatest Canadian of the 20th Century” in a Canada-wide poll. 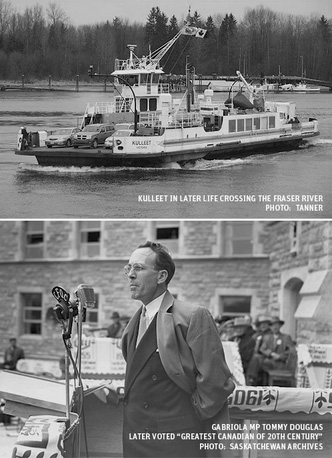 Built in 1977 for the BC Ministry of Transportation and Highways coastal fleet, the Quinitsa was placed on the busy Nanaimo Harbour to Gabriola Island run, replacing the 30 car Kaholke.

After only five years on the route, the Quinitsa was found to be too small so she was replaced by the 70 car ferry Quinsam in June 1982.

When she returned to the Highways Ministry, she was permanently placed on the Buckley Bay to Denman Island run. 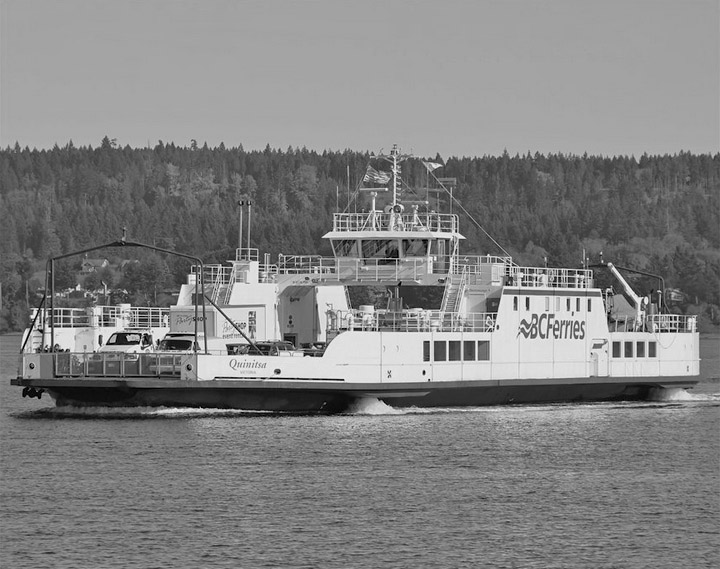 BC Ferry Corporation Takes Over

The Quinsam was built in 1982 for the BC Ministry of Transportation and Highways saltwater ferry fleet, and stationed on the Gabriola to Nanaimo run to replace the smaller Quinitsa.

In 1985 all of the Highway Department saltwater ferries, including the Quinsam, were transferred to the BC Ferry Corporation.

The Quinsam served the Nanaimo to Gabriola route until 2022 when she was replaced with two smaller ferries with a total increased capacity. 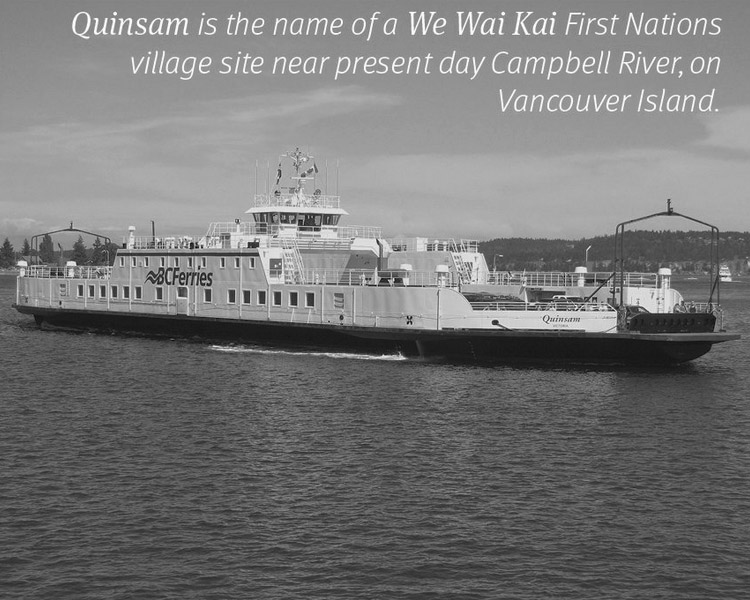