Some of the exhibits outside and around the Museum include large artifacts from Gabriola’s industrial past such as a logging arch, millstones, and Lighthouse fog horns.

Used in pulp and paper mills during the 1930s Clyde H. Coats donated this millstone and circular saw to the Gabriola Museum in1993.

This cylindrical millstone, used to crush pulp in the paper milling, was quarried from sandstone deposits above Descanso Bay on the north end of Gabroila.

The steam-powered steel circular saw was used to cut the millstones.

The Gabriola sandstone quarry opened in 1895 and exported building stones that were used in structures including Victoria’s Post Office and Customs House (1898), and Vancouver’s Beatty St. Drill Hall (1899) and Carnegie Public Library (1902).

By 1911, as other materials replaced sandstone, the quarry was abandoned.  In 1932 it was revived by the J.A & C.H. MacDonald Company which moved its millstone operations from Newcastle Island to Gabriola.

MacDonald cut and shipped about 10 millstones a week to coastal paper mills from Power River to Ocean Falls.  Some were even shipped to Finland.  MacDonald’s operations ceased in 1936 when man-made materials replaced natural sandstone in pulp mill.

Common in the 1940s and 1950s, logging arches were used to skid logs in selective logging on Gabriola

This logging arch was built in the 1940s by Hyster Corporation in Portland, Oregon, and was used to selectively log old growth forests on Gabriola and Valdes Islands until the late 1970s. Loggers operated the arch by attaching a heavy steel cable to the end of a log, and then drawing it through the eye at the top of the logging arch to a winch on the back of a tractor or bulldozer.  As the winch tightened the cable, one end of the log would lift off the ground so the tracktor could drag the log for loading onto a truck or to a waterfron log-dump.

Before the advent of machinery such as the Hyster logging arch, logging big first growth trees on Gabriola involved heavy, back-breaking labour. 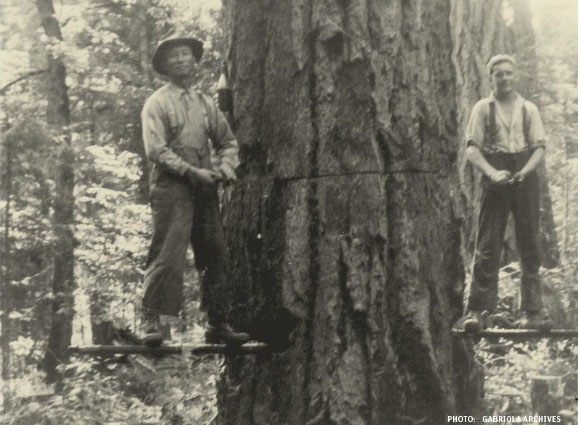 Logging  on Gabriola before machinery This Airchime foghorn was in service from the early 1960s to 2004 on Entrance Island Lightstation, off the northern tip of Gabriola Island.  The horn is made up of two ‘bells’ of derrering lengths and frequencies, and was powered by compreessed air supplied by a deisel power compressor.

The Airchime type horn was designed by Nanaimo engineer Robert Swanson in 1949 and became widely used on Canadian railway locomotives, ships and lighthouses.

Most BC ferries still voice their arrivals and departures with Airchime horns.  The best known Airchimes are the ten giant horns at Vancouver’s Canada Place that have sounded the first three notes of “O Canada” every day since 1967. 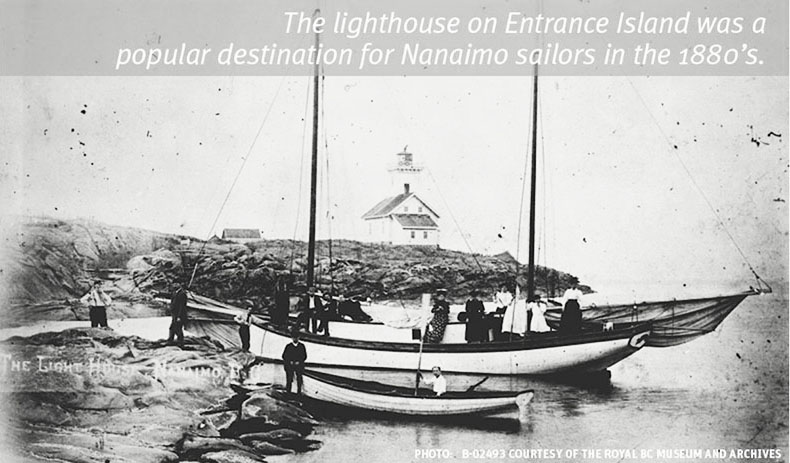 The Lighthouse on Entrance Island was a popular destination for Nanaimo sailors.  Photo courtesy of the Royal BC Museum and Archives.

After many delays, including a contractor absconding with government building funds, and a tragic accident where three workers drowned in a small boat while sailing back to Nanaimo, the lighthouse on Entrance Island began operating in 1876.

One of the first lightkeepers was Gabriolan Robert Gray.  His duties included keeping the whale-oil beacon burning all night, sounding the foghorn during thick weather, maintaining the machinery and buildings, measuring daily temperature and rainfall, recording ship movements and rescuing mariners in distress.

Entrance Island’s foghorns were dismantled in 2004, but the lightstation is still staffed by lightkeepers who perforn many of the same tasks required to maintain the beacon that continues to mark the safe entrance to Nanaimo.