The LeBoeufs were among the earliest pioneers on Gabriola Island. Although they may have been here as early as 1867, and stayed as late as 1900, the first record of their presence on Gabriola dates from 1874[1], and the last, from 1898. They pre-empted 160 acres at the north east end of Gabriola, facing Lock Bay. A smaller bay to the north is still called LeBoeuf Bay on current charts and maps [2].

Theodore was born on May 20, 1835, in eastern Canada. His future wife, Maria, was born around 1843 to the Tongas(s) people of Cape Fox, at the southern tip of the Alaska Panhandle (about 70km NNW of Prince Rupert). Whatever brought these two strangers from opposite sides of the continent together, they were married on May 28, 1867, in Nanaimo, following her baptism[3]. Canada was weeks away from Confederation, and coastal B.C. was in the midst of a depression.

They were homestead farmers, growing crops of vegetables, and raising cattle and poultry, both for their own use and for market. The LeBoeufs were mentioned in a Nanaimo Free Press article which praised the industry of the Gabriola settlers. Theodore was an accomplished carpenter, skilled with the broad axe, and built many barns on Gabriola and in Nanaimo. He is also remembered for constructing remarkable ditching systems, some of which are still in use today. To his neighbours, he was known as ” the Frenchman”. Maria worked in other settlers’ homes, as a washerwoman[4].

Maria LeBoeuf died on November 11, 1876, at only 35 years of age. She was buried two days later, in the cemetery of the new St. Peter’s Church, on Fitzwilliam Street in Nanaimo [5], one of the first to be interred at this cemetery. Theodore and Charles were the only occupants of the LeBoeuf household at the time of the 1881 census.

In July of 1884, there was an explosion at the Wellington Colliery, near Nanaimo. On May 3, 1887, there was another disastrous explosion at the #1 shaft of the Vancouver Coal Company mine in Nanaimo[7], in which three sons of Gabriola farmers were killed. On each occasion, concerned Gabriola citizens raised money for the widows and children. Theodore contributed a dollar each time.

On July 1, 1885, Theodore was elected to be Trustee of the Gabriola school , a position he held for three years[8]. His son Charles would have been school age, however no record of his schooling has been found.

In 1886, Theodore was mentioned in the Free Press for growing an amazingly large blood-red beet, which weighed 12 pounds, with roots and stems removed, and a turnip beet, weighing 7 pounds. The newspaper headline read — WHO CAN BE(E)AT THIS?[9]

On August 14, 1887, tragedy once again struck the LeBoeufs. According to the Nanaimo Free Press, Charles was swimming with friends at Rocky Bay (now called Descanso Bay, the site of our present ferry landing), and suddenly disappeared under water. Although his friends ran for help from neighbours, who tried to resuscitate him, they were too late. The cause of death was given as “cramping”. His funeral was held at St. Peter’s Roman Catholic Church, Nanaimo, on August 17, the Rev. Father Durand, the parish replacement priest giving the service. The church records are incomplete, but it can be assumed that, according to custom, Charles was laid to rest beside his mother Maria’s unmarked grave, which has been located with the aid of church records[5].

Some time in 1889, Caroline LeBoeuf married Richard Gilbert at St. Peter’s Church. Theodore was present as witness[5]. Their first child, Adeline (Adelina), was born on Gabriola, on February 20,1890, and baptised on April 27, at St.Peter’s. Theodore was the sponsor[5].

Alese LeBoeuf, the younger daughter of Theodore and Maria, was married in Victoria on September 2,1897[10], to William Miller, a 38-year-old German-born longshoreman from Tacoma. On March 30,1903, a daughter — Isabella — was born to Alese (Elizabeth LeBoeuf) and Robert Rivers, in Nanaimo. She was baptised at St. Peter’s Church. Adelina LeBoeuf, cousin to Isabella, was the sponsor[5].

On February 20, 1894, The Free Press reported that Theodore was very ill at his Gabriola home. He was attended by friends who sought medical help from Nanaimo[11]. There is no further information about this illness, but we know he survived it. He was registered as a farmer on Gabriola on the 1898 voters’ list for the Nanaimo area — no other family members appear on that list. He left the island prior to the 1901 census, and died of “apoplexy” on November 23, 1903, in New Westminster, aged 68 years[12].

Richard Gilbert died on November 6, 1918, at the age of 57 years, one of the many victims of the terrible influenza epidemic of that year[13]. We have so far been unable to trace Caroline, Alese and their daughters beyond Gabriola.

If you can help us fill in the gaps in the story of the LeBoeufs of Gabriola Island, have questions about any of our information, or would like more information about this family, please email the History Committee ( history @ gabriolamuseum.org) and let us know. 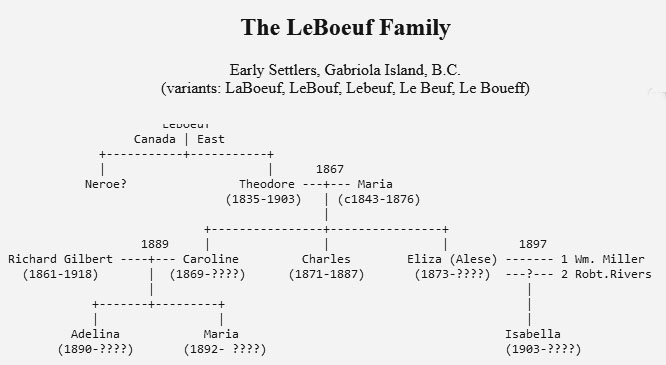